In April 2008, I knitted my first Moebius scarf and was immediately hooked.  (Remember the Moebius band we learned about in math class?  Give a long strip of paper a half twist, then join the ends with tape.  The result is a one-sided, one-edged object.  Test it: Put a dot on one side of the strip at the taped edge then run your finger along the edge. It will first meet the tape on the side opposite the dot, and later will return to the dot, even though your finger stayed on the edge the whole time.)  Moebius knitting is the most fun you can have with the craft! 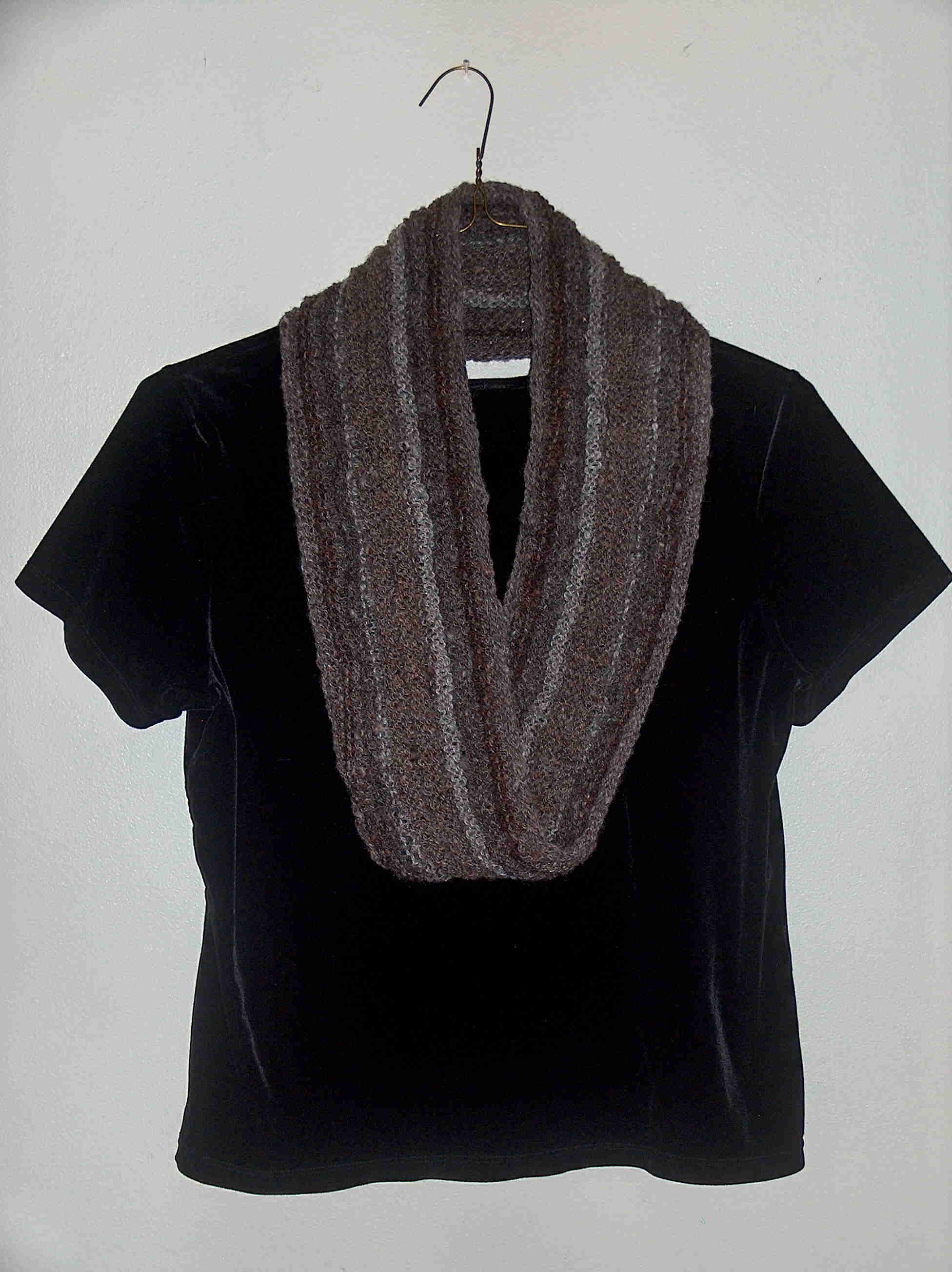 The Moebius scarf at right (the twist is at the fold at the bottom) is sheep-to-scarf: I spun wool from a fantastic sheep named Big Mama, who was grazing in Towanda PA at the time I received the fiber (she now lives an hour from there with a new owner).  All the colors in the yarn were those of Big Mama’s; none came from dye.  The scarf now belongs to Big Mama’s former owner and new fiber friend, Catherine Veleker.

This year, after finishing up some socks for a friend, I took a break to explore Moebius knitting further.  Cat Bordhi published two books on the subject, and her felted trifold bowls beckoned exploration.  I first knitted the Somersaulting Trifold bowl in her book (well, more than one; not enough room to show all the photos); the rim has three half twists,… 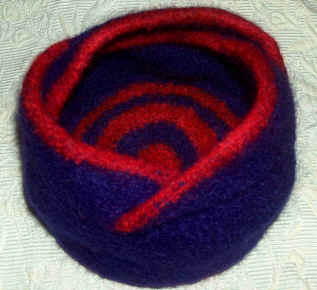 …then a five-fold bowl,… 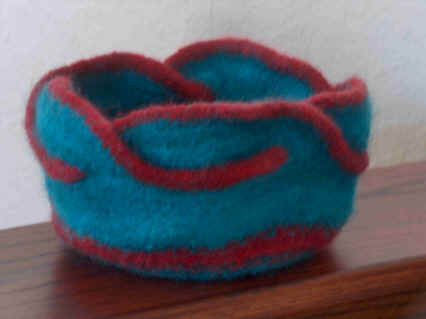 …then a seven-fold bowl with two-color knitting (count the pink scallops going around the edge),… 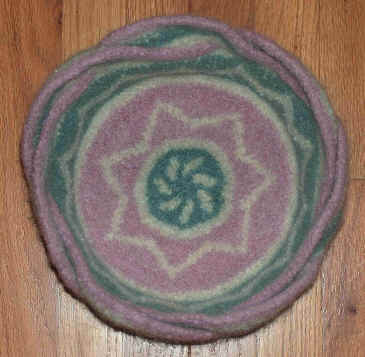 …and a nine-fold bowl (this could make a fine cat bed; the red yarn bled some in the washer): 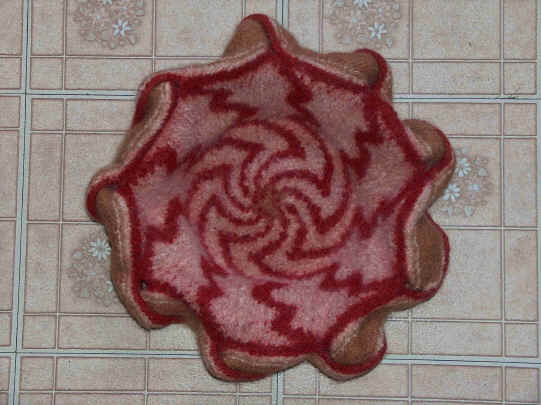 Here is a photo of the nine-fold bowl in progress.  Its half twists are clipped together and waiting for the bowl portion, which is attached by picking up stitches around the inside edges and then knitting a flat circle in the round.  This strip surrounds fragrance sticks at the home of my music colleague, conductor David Poole, in Albuquerque, NM: 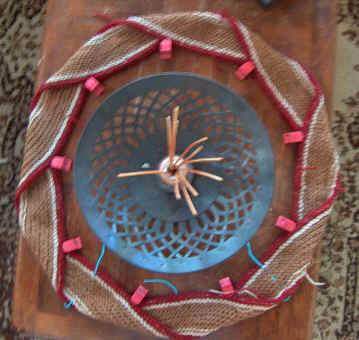 Perhaps I will someday attempt 15 half twists.  Anyway, I hope you can understand how much fun Moebius bowls are to make.  And because they are felted, you never really know what the end result will be until each one comes out of the washer.

Feel free to leave a comment about what you see.

Back to Moebius Head- and Neckwear

I took Moebius clothing accessories into new areas, such as: 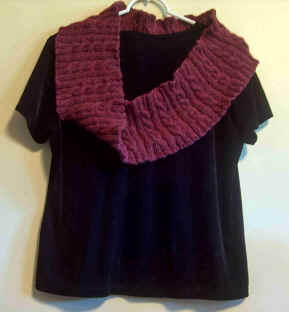 A Moebius collar (kinda like those of Shakespearean days, but certainly with an attitude) having vertical ribs (compare with the horizontal-rib scarf above):

Then I decided to knit a cabled Moebius scarf (right)  This project was originally intended to be a smaller, cabled cowl, but the beautiful yarn, an alpaca/merino blend, turned out to be scratchy when hugging the neck, so I frogged it.  (“Frog”=”rip it, rip it.”)  The lesson: Always brush a skein on your face to see if the yarn feels soft.  This scarf version is nice and warm, however.  I once got to wear it in July when a cold snap in the 40s hit Denver!) 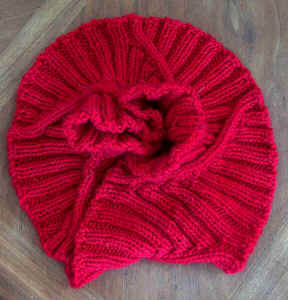 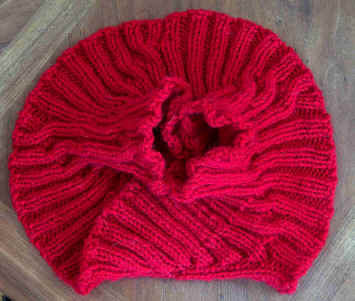 Yikes!  Is this a two-sided Moebius collar?  It was knitted as a one-sided object!

How about a Moebius hat? 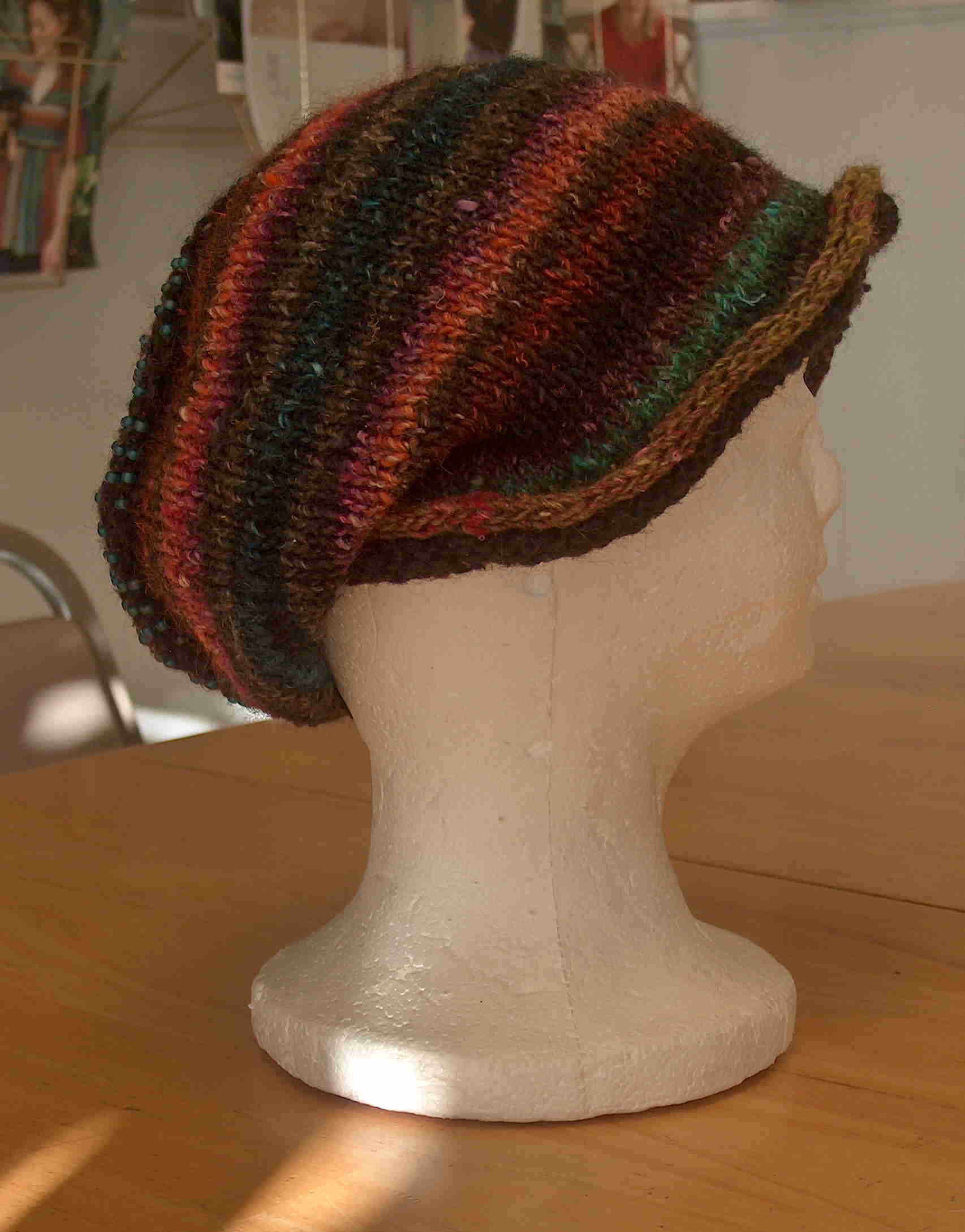 Feel free to leave a comment about what you see.

Oh my, a ONE-SIDED sweater?  Well, not quite, but it sure was fun to try this. 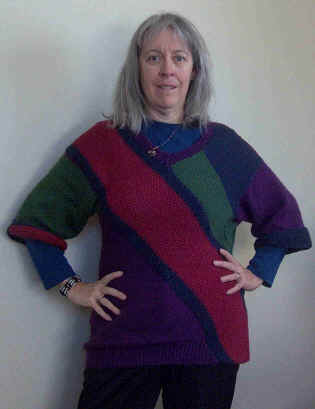 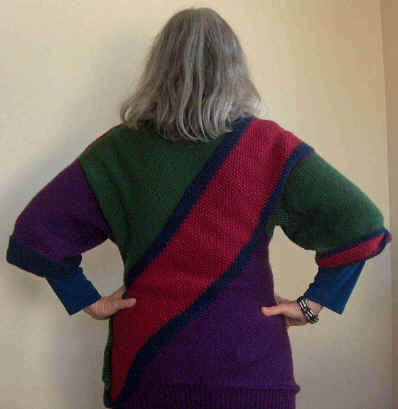 The red and navy diagonal stripes are a Moebius band.  Note a smaller Moebius band as one of the sleeve cuffs.

A little history: I began knitting my first sweater from scratch on Sunday October 4, 2009. (I’d just had major eye surgery and was bored to tears. Not sure how I did this with terrible vision in one eye.) No pattern, no sewing, just a gauge and a chest measurement and then several percentages of the latter; it was a plain V neck with long sleeves.  #2, now with the help of Knitting in the Old Way, by Priscilla Gibson-Roberts with Deborah Robson, was a sleeveless vest for my husband.  This sweater is #3, testing the percentages and the waters for knitting on the bias.  What can I say?  The system works!  I have another Moebius sweater in mind.