Sustain: That long, luscious, lingering sound that attracted us to playing the dulcimer.  Just about everyone who plays the dulcimer tells me it’s the sound that lures them toward playing, and I assume they’re referring to sustain more than anything else.  But once we begin playing, all of a sudden the very thing that appeals becomes a hindrance to the tune, the harmony, the arrangement, to our ears….  Why?  Well, maybe that’s because the sustain also sounds a little too loud and bright (the reasons behind this are another subject altogether).  Still, dulcimer players do their best to “avoid” sustain (at least one builder has admitted to building it out of his instruments!), either by rigging damper systems on dulcimers or ornamenting a tune ad nauseum (and before its time, yet another subject).

When I asked dulcimer players to define “embellishment” in a questionnaire I’d assembled in 1998, one person defined it by including two statements relating to sustain. The first was: “Filling in the silent spaces.” I find this comment interesting, because the “spaces” between notes are anything but silent to my ear. After this statement from the same person came, “Not letting the dulcimer ring.”  Huh?  Isn’t “ringing” what we like about the dulcimer?  I’m confused!

What, then, do we do with this two-edged sword?  Do we resort to damper systems? (Seems to me that if we’re going to go that far, we might as well play the piano!)  Dampers are certainly a sound option to us, but we don’t have to totally turn off  the sustain.  There is a happy medium we can strike here (no pun intended).

To me, sustain is the dulcimer’s glory, which we can choose to work with or against.  It’s therefore important to understand what sustain is, according to how each dulcimer wields it, and how to use it to advantage, as well as how best to control a long sustain.  (Remember, you can’t make a short sustain longer, but there are ways to mask a long sustain to sound shorter.)  If you perceive sustain to be your worst nightmare, I’ll hope that what follows will help you make it your best friend.

To check your dulcimer’s sustain; you’ll need your dulcimer, hammers, and a watch or clock with a second hand.  In your dominant hand, hold one hammer; in the other, hold the stopwatch (or nothing, if you’re watching the clock).

On the right side of the treble bridge, firmly strike the G course in the middle of the strings, and time the sustain to see how long it lasts.  When you time the sustain, just sit or stand at the dulcimer as you do normally; don’t lean over to set your ear close  to the strings.  Then one more test: Strike the string, set the timer and quietly walk 10-15 feet away, to time what you hear from there.  The timing may or may not be shorter.

When I strike a course, my dulcimer gives a whopping 15 seconds of sustain!  From an audience standpoint, about 10 seconds of that is audible.  Is even ten seconds a problem for me and them?  No.  In fact, it’s an asset!  The only time sustain is a problem is if I choose to ignore it as part of the sound equation.  Especially because I choose not to use dampers (although I’d probably have a lot of fun with them if I had them), my dulcimer’s sustain becomes part of the “sound architecture” of every tune and solo piece I arrange, shaped in such a way as to enhance the music, rather than get in the way. Here are some ways that you can do it, too (note that this list assumes the dulcimer has a long sustain):

As for short sustain:

A short sustain on a dulcimer sets the sound equation differently! While my experience here is limited, what I have noticed from briefly playing short-sustain dulcimers is this: To make chords work well under a tune, I chord more frequently in slow tunes than what I described in 3 above.  Quicker-paced tunes seem to get on okay with some space between chords, adding a solid, rhythmic element.  In short, support the tune with chords or double stops as it needs it.
So, don’t be afraid of sustain!  (After all, it’s only sound.)  To help you begin to explore the wonders of sustain, shown below is “Cincinnati”, one of my favorite tunes in Striking Out and Winning!, shown with “lean-ins” rather than accents, shown by the tenuto lines drawn over selected notes (where to strike the strings appears with the tune in the book).  While it’s possible to place accents both on and off each beat (on the first or third eighth note of each beamed group respectively), my accent placement here is defined more by the shape of the tune; for example, in the first three measures, each A can be part of the melody, or can be interpreted as accompaniment to the other pitches sounded in that area (which means only half the notes are melody).  Because the accents are irregular, it may take a while to get a feel for where they go, but the end result sound-wise is awesome. 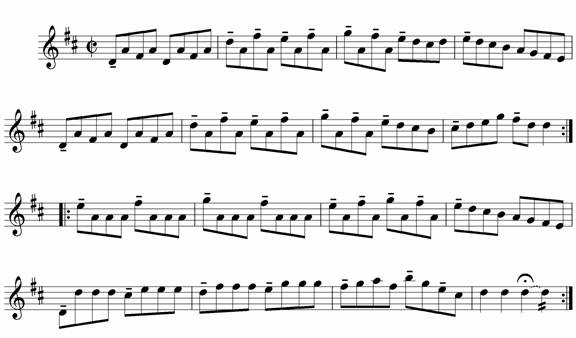 For a related article on this topic, click here.