In October 2015, I took up a new craft: Viking knit wire jewelry.  It’s something I’ve wanted to do for a while.  Here are two photos of one of my creations: 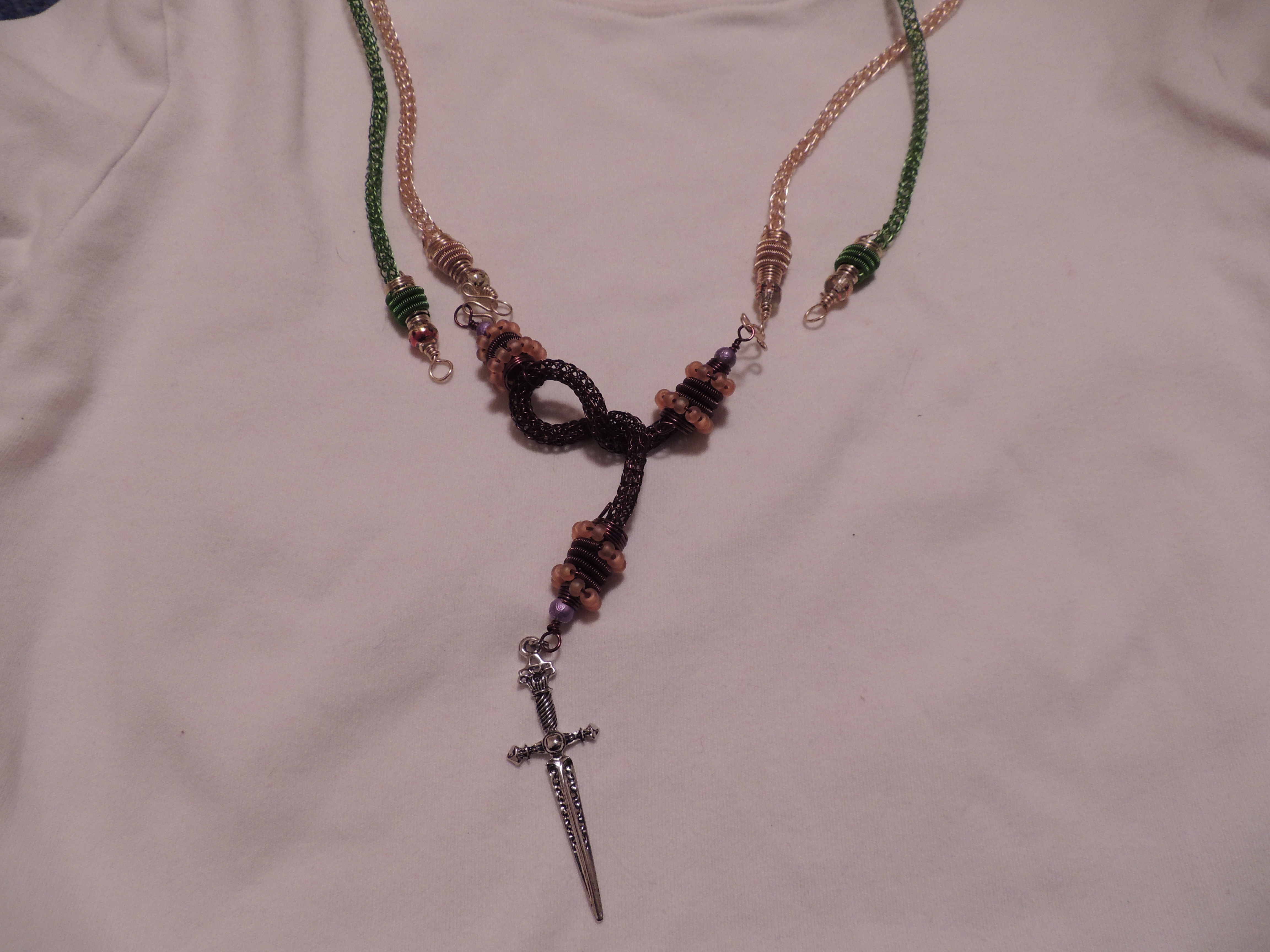 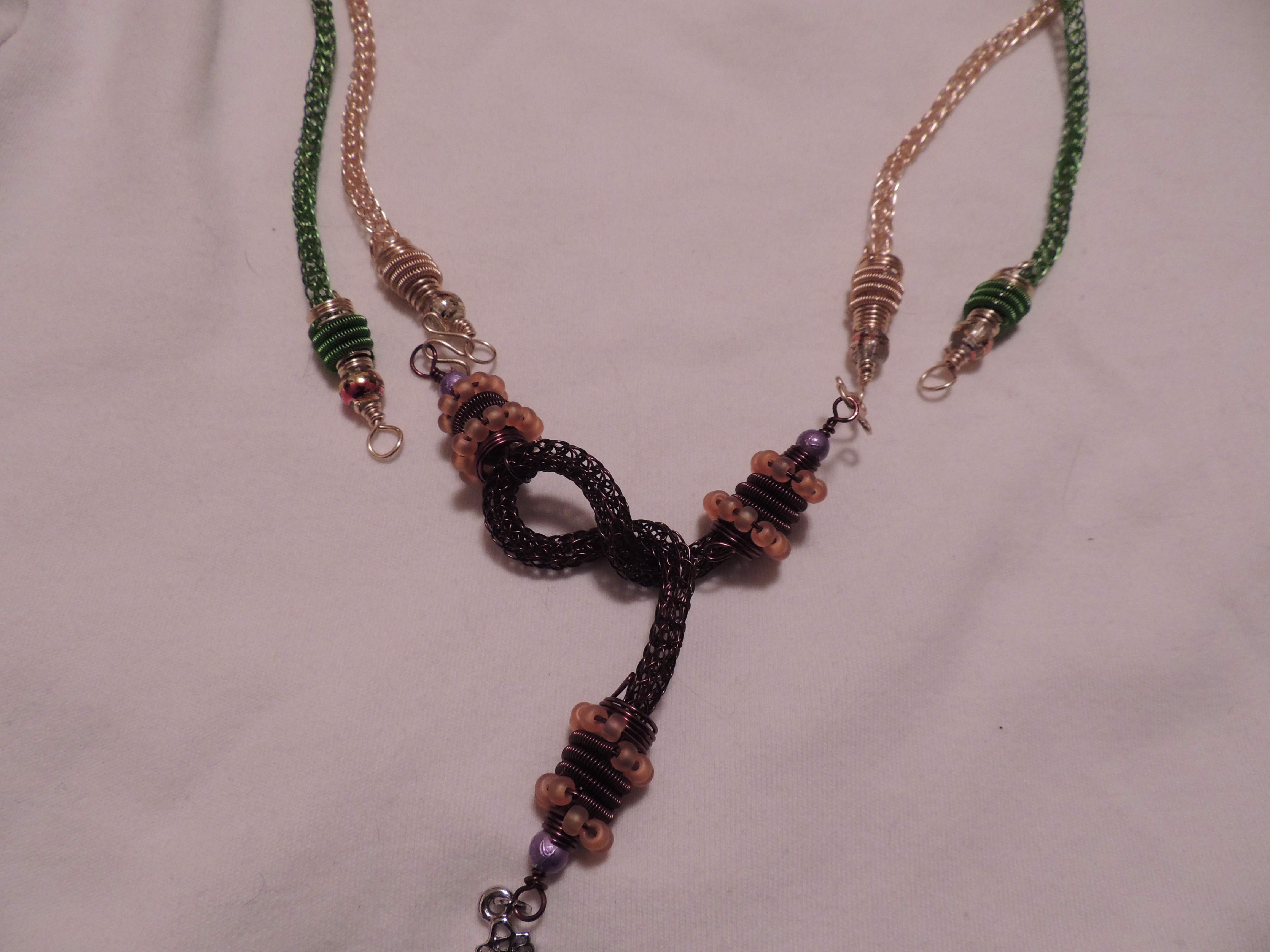 This is for church: two necklace chains appear with the pendant to demonstrate that they are part of a growing, modular set.  The gold and green chains match different seasons of the church year; I will wear the appropriate color as per the season.  Other church-year colors are purple, red, pink and black, coming soon.

The twisted Viking knit in the pendant came from a book I purchased in order to acquire more how-to about assembling the various components into finished pieces.  The instructions for the twist say to first thread a heavy wire through the straight piece of Viking knit tube, attach both beaded end caps, and then twist the Viking knit piece into shape.  This I did, twice.  Both times one of the end caps floated well off the end of the Viking knit, exposing at least a half inch of the thicker wire running through the tube.  After careful pondering, and realizing this gap was not going to close by any wrangling on my part, I at last ditched the instructions, inserted a fresh piece of thick wire, attached one end cap, twisted the tube and then cut the thick wire short enough at the other end so that the second end cap would snugly cover the other end of the tube.  After this, I consulted my Australian webcam autoharp student, Ken Sluce.  A retired jeweler, Ken confirmed that twisting and curving a wire piece of this type does in fact compress its length.  (I needed to hear that.)

I do not understand how an experienced Viking knitter would not think to tell readers such a vital point as this to ensure success.  (I was becoming a victim of insanity: doing the same thing over and over again and expecting different results.)  Other how-tos in this book, plus another wire-jewelry book I own that includes Viking knit, leave instructions lacking.  For example, I could not figure out how to attach an end cap to Viking knit chain itself (you can see at the end of the necklace chains in both photos above that something secure eventually happened).  And there is just no way a finishing loop can be centered on the end of a thick wire by bending it to 90 degrees (something closer to 100 degrees is more like it).  I am also slowly discovering how the various hardnesses of wire behave, because no charts or explanation seem to exist, either in books or on the Internet.  (This means my wire cache has grown more than I’d like, but that’s another story.)

Through this Viking knit journey, I thought about a curious statement players sometimes make about my teaching: “She’s trying to make me play like her.”  I don’t know how they deduce this; it would seem that emotion overrides reality.  Just as I want to glean basic skills for Viking knit from the books I have, rather than make exactly the same items as the designer, I desire to teach basic skills in music-making to my students so that they will play successfully all the time and be satisfied musicians.  There’s the student who trips over the beginning of a tune who’d rather start up and have it sound fine (there’s a movement missing).  What about the student playing in pain?  (There are a host of possibilities here, but they can be narrowed down and troubleshot.)  What about that instrument that’s supposed to sound wonderful but doesn’t?  (This usually boils down to a couple simple changes in technique, ergonomics, even how the student listens.)

Those who realize the need for basic skills eventually find what they want.  Ken Sluce, via webcam of all things, has transformed his playing with beautiful sonorities, making me, his teacher, one of his biggest fans.  A hammered-dulcimer student, Angie, is mastering the precision of movement between hammer strikes that make her playing resonant and rhythmically solid.  Another HD student, Kim, eradicated dulcimer-generated back pain immediately by changing one small thing.  Everyone who plays music–or does anything, for that matter–needs some kind of “organizational glue” to hold the music-making/whatever together.  Some of it is a fast fix, some of it takes time, but all of it is good.  In the world of music, well beyond “right notes,” perfecting basic skills is a big part of what encourages listeners to listen to us again.

If I was really going teach someone to play like me, I would require them to duplicate every note I play, written down or not (never mind that those unwritten notes often change), with the same kind of feeling (oooh, there’s a tough concept to transmit).  I have never done this and frankly don’t know why I would.  Feeding my exact notes and nuances to someone else would be uninteresting and boring.  I would rather free willing minds to retool melodies in different ways of their choosing, something I am eager to teach and have only done twice.  To do it, students need to have a few simple, basic skills on “automatic pilot,” because where we will go is a matter more of the ear than the intellect.  (One potential B&B hammered dulcimer student is working towards this place as I write.  I look forward to her coming when she is ready.)   The traditional approaches of “folk process,” “do it any way you want” and “have fun” indicate too little and are at best vague.  That’s mainly because they talk about another, higher realm–creativity–which relies on basic skills to drive them.  Anyone who wants to go to the big stuff of improvisation, alternate harmonies, even playing fast or slow (slow playing is harder than fast, by the way), needs basic skills to lean on.  Then some wonderful music-making can happen.

I’m back to the music, and while I’m practicing, I will simultaneously decide what to do with the 1/4-inch tails of wire that occur in Viking knit every time a new wire is joined  The instructions simply say to cut the old and new tails to that length.  And then,…?  Do I weave the ends in?  Leave them free inside the knitted tube as the wire continues to loop around?  Ah, my kingdom for basic skills….

Previous: The End of an Era
Next: Teaching vs. Teaching, Part II