I’m still learning how to make Viking knit chain.  I made the piece at right in the Broncos’ honor for just a few dollars (the NFL Shop at Macy’s wants $150.00 for a shirt).  Now that the Broncos have won SuperBowl 50, well, I may get some more use out of this piece for the rest of the week. 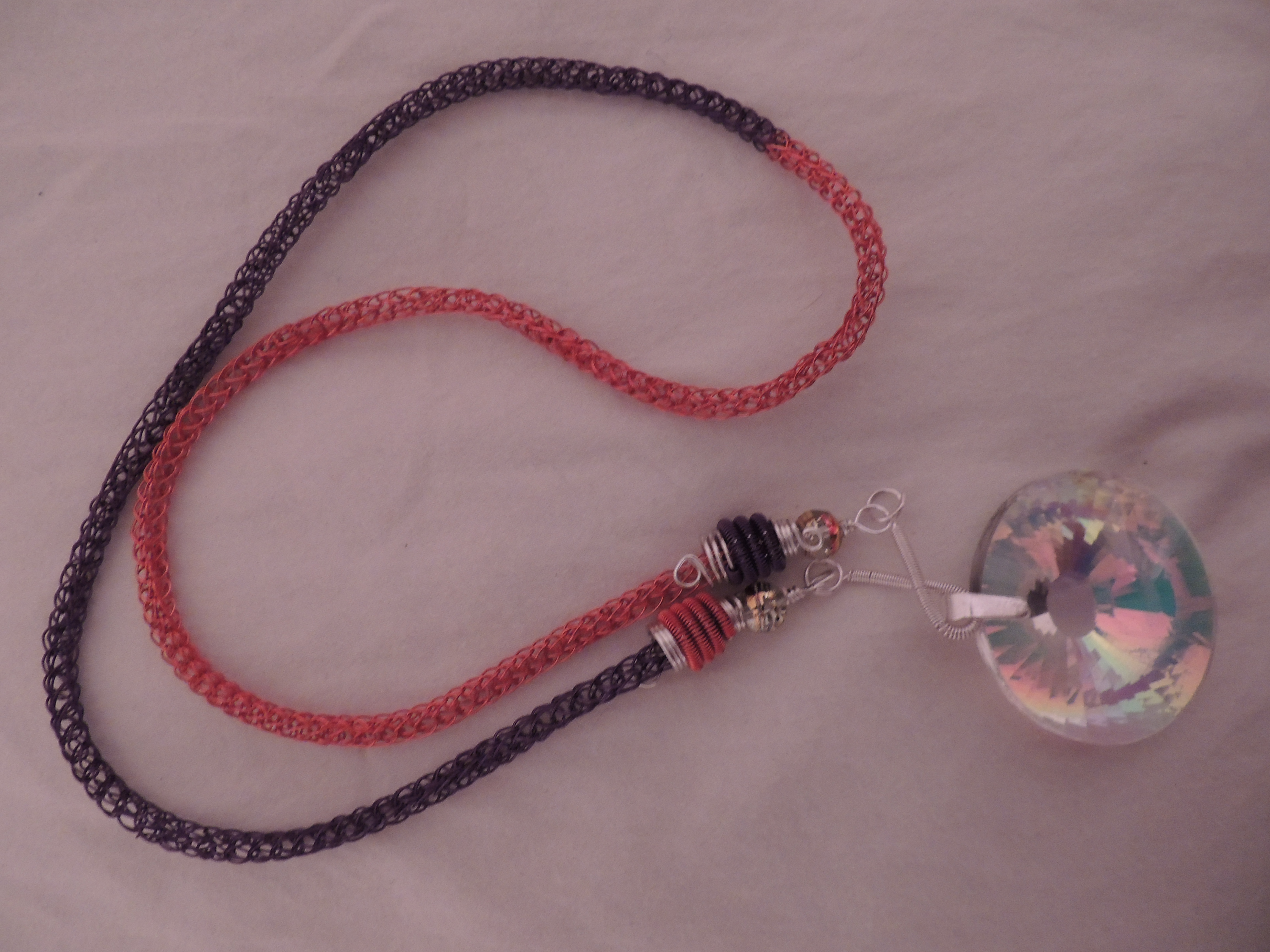 So back to the subject at hand.  What I’m learning about Viking knit has loads to do with how students in my dulcimer and autoharp workshops respond tonew techniques I impart.

When I left you last, in the previous post, I was struggling with joining new wire to old.  After misinterpreting the instructions in a book devoted entirely to the subject (I could have taken a little more time clarifying the how-to in my mind; funny how that works), I finally nailed the joins as per the instructions, but they still didn’t look invisible or continuous enough to my eye.

I began to experiment with variations.  After about three tries, I found an alternative that was pretty good.

And then I remembered another book on my shelf about knitting with wire that includes a small section on Viking knit.  What did it have to say about joins?  Ah, more careful reading, because some italicized type appeared at first to confuse.  (Ah, the power of the printed word; writing is very hard.)  The illustrations could be clearer if they were photographs, but with some time and thought, the technique eventually made sense.

Off to knit like the Vikings I went, but I have to say I was a little afraid to give this new join method a go.  After all I’d been through with wire joins, did I really want to try yet something more?  (I can’t believe all the Viking knit chain I’ve messed up because the wire ends stick out: scratch, scratch on a neck or wrist.)  I held my breath and tried it–and lo and behold! the join is more invisible and easier to work than all previous methods.

I understand a little better now the fear and trepidation of some autoharp and dulcimer players who come to my workshops.  They are already coping with whatever clunky method for years that they either learned from someone else or conjured up themselves.  (Don’t move my cheese; I need it here.)  They want their music to feel easy to play and eagerly seek that something that will fall out of the sky, plop down on their heads and deck them with poof! you’re musical.  Instead, they play in pain, which we hear in their music-making.  They need another way, but change is hard.  The thought processes go something like this:

So we need to be flexible and open.  I need flexibility as a teacher, and my students need flexibility because they are students.  On several occasions, I have found my own playing to work itself out some other way than how I was teaching it, and what a joy it is to discover and teach what I’m really doing!  When it is found, it saves both me and the student time; we’ve found out where to be to let that something fall out of the sky on our heads.

So for now, I’ll enjoy that new join method; it spares me a lot of grief.  And I’ll enjoy the music.  Hope you enjoy yours, too.  But wait!  There’s more!  Click here!

Previous: Teaching vs. Teaching
Next: How Many Autoharp Techniques Can There Be?