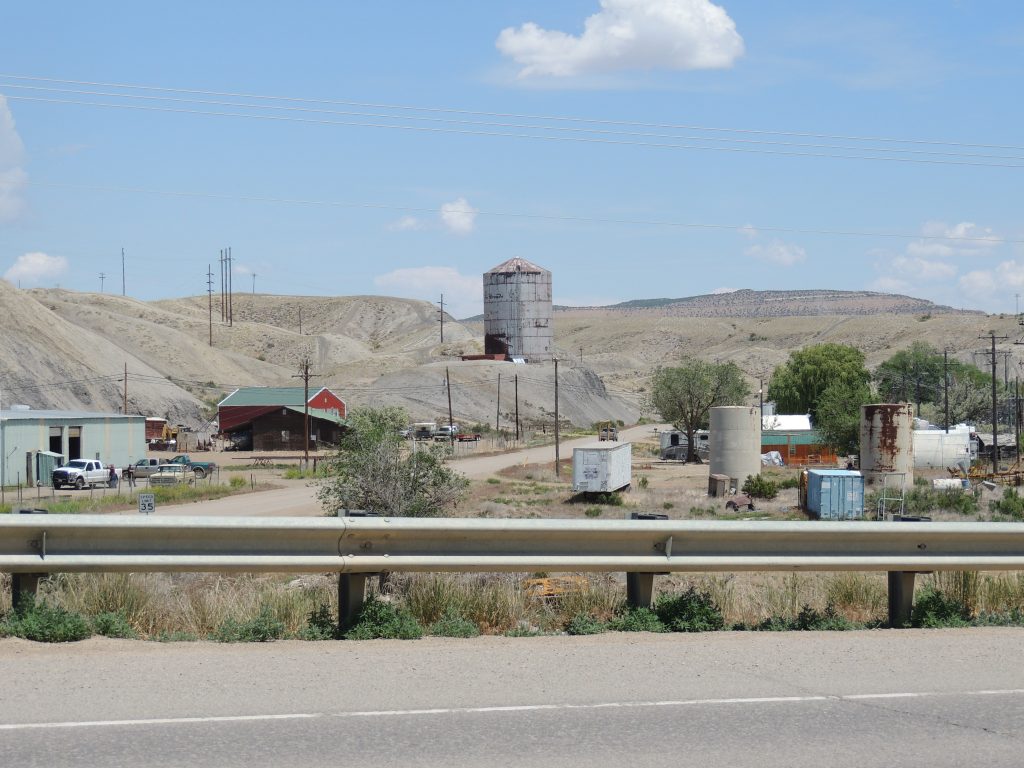 The TANK, just outside of Rangely, Colorado on the industrial side of town.

On June 6, 2016, autoharp student Garrett Sullivan and I journeyed to Rangely, Colorado some five hours west of Denver to engage in a recording session at not just any recording studio but at The TANK, a water tank that was never used for its intended purpose that has since become known as an acoustic wonder of the world.

And is it ever!

About a week before we headed out to Rangely, Garrett and I prepared a couple duets for the session.  First, we went to The TUNNEL in Denver, a place I’ve known about and sung in for several years.  We set up and played while bikers whizzed by.  The TUNNEL doesn’t pick up string sounds well (they remained local to our instruments).  Singing works best there, although a singing demo on my part gave Garrett a little taste of what we might expect at The TANK.

In Garrett’s words, we prepared for the war without really knowing what the battle would be like.  Still, I was able to caution Garrett about slapping his lap at the end of one of our duets, knowing full well that anything would resonate for at least 20 seconds, whether you wanted to hear it or not..  Tapping feet while playing was out, too.

Perhaps my best preparation for this session was all those decades of playing the hammered dulcimer and working with its sustain.  (All the more reason not to have a damper system to play with!)  Its 15 seconds or so of trailing sound after the final strike proved very useful here. 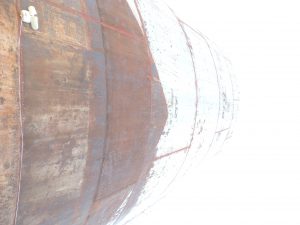 Once inside The TANK, talking casually in normal voice excited the space.  I sang some pitches to test the acoustics: sing three chord tones one after the other, and The TANK can turn one voice into a choir!  Wow.

Could we take photos during the session inside The TANK?  Sure, as long as the camera shutter button doesn’t make sound (my camera turned out to be off limits).  The TANK magnifies everything. 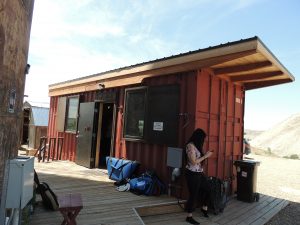 Sammi takes a phone call outside the control room. The TANK stands along the left edge of the photo.

[/one_half] [one_half_last]So Garrett and I set up for our autoharp duets while Greg, the recording engineer set up two mikes at instrument height and suspended a third overhead.  We then played “Skye Boat Song” as a duet.  Upon listening to it in the control room across the short boardwalk, I could tell that just one autoharp would sound more clear, so I encouraged Garrett to play it alone.[/one_half_last]

We then recorded our second autoharp duet, “Southwind,” which went smoothly, and which you can hear here.

Just for fun, I gave “St. Anne’s Reel” a shot on the autoharp.  Now in the battle(!), I didn’t have much hope for success, and it was so: Playing the reel up to tempo didn’t work at all, and slowing it down was still too fast for The TANK to keep pace.  The TANK prefers s-l-o-w tempos with notes that can take their time singing.

The more we played, the better we caught on to what The TANK was capable of firing back.  Garrett and I then each took turns playing autoharp solos and even singing chant to test how The TANK would respond.  Listen to my rendition of an ancient “Sanctus” (“Holy, Holy, Holy”) here.

I also improvised on the hammered dulcimer, which Greg immediately named “Picking Mushrooms From the Cow Pies,” heard here.  (Yep, it really does sound like that!)  A more stellar moment was plucking “In the Bleak Midwinter” on the dulcimer’s strings, heard here.

Just as I was about to record one of my solo pieces, Adam, the recording engineer trainee, opened The TANK’s door to stop me.  A plane was flying overhead, which I already heard from inside.  We waited and waited and waited, until Adam declared it gone.  Then he shut the door: SLAM-Lam-La-la-aa-aaa-am-mm-mmm…., a frighteningly comfortable sound of aloneness  I waited a l-o-n-g time for quiet again before starting up that next number.

Oh, here’s another piece: “Skye Boat Song,” played a lot slower than usual on my ultratonic autoharp.  Listen to the after-ring.

Sammi, the assistant engineer, caught on to my singing almost immediately upon our meeting that day.  She suggested that we sing an improvised duet together.  What an opportunity!  This was lots of fun, and totally unrehearsed!  (You know how amazing it is to make music with someone you just met?  It’s really cool!)  Our singing began with “straight” tonality.  I sang some vowels and Sammi joined in by humming first, to warm up her voice.  Once she brought in full voice, I “out of tonality” to see what dissonance would do.  Not even the most grinding interval fazed Sammi; we both knew then that we could do anything, and we did.  We went on for over 17 minutes (ask me if you want to hear it), inventing sonorities, overlapping our voices, and at one point I followed her voice in canon a few notes behind.  When Sammi at last headed towards a high pitch, I sank my voice to a low pitch, and we knew our improv had found its finale.  Then a long pause to allow The TANK to quiet down.  “We’re done,” I said to Greg through the mikes, those two words resounding everywhere.

The most exciting part of The TANK was not just its ability to resonate, but to invite it to be a vital part of the performance.  The TANK quickly taught me to shape sonorities: When singing three notes long-short-long, the short note would be swallowed up very quickly, barely resonating.  But sing them long-long-long, and all three gain an overlapping presence.  Or, I would lean into a dulcimer string, an autoharp chord or a sung pitch as a way to ask The TANK to sing back to me.  So while it’s possible to go in The TANK and just play music, making music while using its resonance with purpose invites The TANK to be an instrument, too.

I’d drop everything to experience The TANK again.  Thanks, Garrett, for asking me to come along! 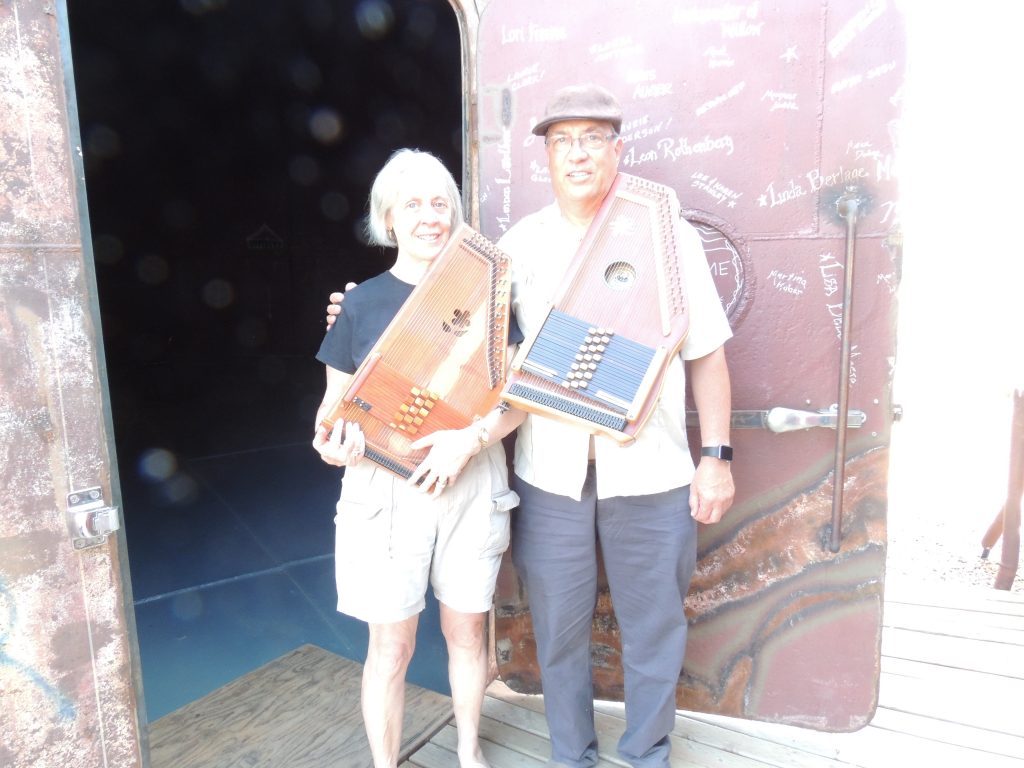 Lucille and Garrett, standing outside The Tank’s door.